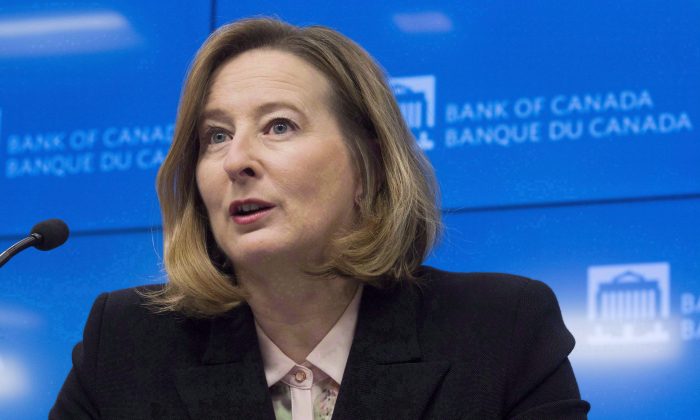 Bank of Canada senior deputy governor Carolyn Wilkins responds to a question during a news conference in Ottawa, on Jan. 17, 2018. She told reporters on Nov. 14 that housing market vulnerabilities are easing slowly. (The Canadian Press/Adrian Wyld)

The Bank of Canada provided a closer look on Nov. 14 at just how much stricter mortgage rules and higher interest rates have helped slow the entry of new households into the category of “deeply indebted borrowers.”

The lofty levels of household debt has been a key concern for the Bank of Canada as it gradually raises its trend-setting interest rate, which it has already hiked five times since the summer of 2017.

To determine the pace of future hikes, the central bank has closely watched how well households are adapting to higher borrowing costs, particularly when it comes to those that are significantly overstretched.

So far, the bank has said Canadians have been making spending adjustments in response to rate hikes and the arrival of stricter mortgage policies. At the same time, the bank has reported that credit growth has continued to moderate and household vulnerabilities, while still elevated, have edged down as a result.

The bank has also credited tougher federal mortgage rules for contributing to the improvement.

A staff analytical note published by the bank on Nov. 14 offered more details about the impacts of new guidelines and rising interest rates.

“Tighter policies around mortgage qualification and higher interest rates are having a direct effect on the quality and quantity of credit.”

The analysis said mortgage stress tests introduced two years ago have reduced the share of new high-leverage, insured loans—those of more than 4.5 times a borrower’s annual income—to 6 percent in the second quarter of 2018 from 20 percent in late 2016.

Another federal rule change this year, aimed at high-leverage yet uninsured mortgages, dropped the share of these new loans to 14 percent in the second quarter of 2018, compared with 20 percent a year earlier.

“The most-pronounced decline has been in the number of new mortgages extended to highly indebted borrowers, which fell by 39 percent year-over-year in the second quarter of 2018,” according to the research paper, which also noted there have been impacts from regional housing market policies.

Speaking to reporters on Nov. 14, Bank of Canada senior deputy governor Carolyn Wilkins said the debt-to-income ratios of households remain “really high,” but have stabilized and are beginning to move down.

“It took a long time for that vulnerability to accumulate and it’s going to take some time for it to diminish,” said Wilkins, who was participating in the launch of the Bank of Canada’s new digital hub that will feature research and analysis on financial stability issues.

“What we were hoping to see would be a continuing improvement in the quality of the loans because what that does is, over time, put the economy on a more-solid footing to withstand whatever adverse developments that might occur.”

Author: BY THE CANADIAN PRESS