Home > Article > The Easiest Holiday Gift That Everyone Really Wants

The Easiest Holiday Gift That Everyone Really Wants 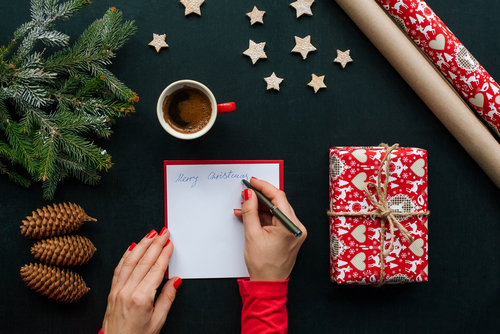 Costing little in time or money, these gifts have the power to brighten the mood of someone’s day and to offer encouragement to the discouraged. (Shutterstock)
For 20 years, I offered seminars in Latin, history, and literature to home-educated students. When the Christmas season rolled around, I brought paper, envelopes, and stamps to class, and asked students to write a letter of gratitude to someone who had positively influenced their lives. Some wrote to their parents, some to relatives, others to mentors like coaches and Scout leaders. They then sealed the envelopes and addressed them, and at week’s end, I would deliver between 80 and 100 letters to the local post office.

As I explained to my students, such letters make great gifts. Costing little in time or money, they have the power to brighten the mood of someone’s day and to offer encouragement to the discouraged. Adults, I would point out, rarely receive the applause to which young people are accustomed. The woman who stays awake half the night writing a report for her boss may receive only a nod of the head for her efforts. After a long day of work, a man comforts a crying baby in the middle of the night so that his exhausted wife can rest. Another admirable gesture, but no one other than his wife is cheering him on from the sidelines.

That these holiday letters had an effect became apparent when the students heard back from the recipients. Many parents told me how much the letters had touched them. A basketball coach said that his letter had left him walking on air for a week. One normally reserved grandfather wept on the phone when he called to thank his grandson.

Now two researchers are reporting that notes of appreciation do indeed generate happiness in their recipients. Amit Kumar, a professor at the University of Texas at Austin who researches well-being, and Nicholas Epley of the University of Chicago Booth School of Business, asked 100 participants to write a short “gratitude letter” to someone who had influenced them. Many of the participants wrote their letters in less than five minutes. Once they had finished the letter, the students filled out a questionnaire, ranking on a scale of one to five what effect they thought their letters might have on the recipients. The students rated that effect as a three, but the recipients, contacted by Kumar and Epley after they’d received the letters, and asked the same question, averaged a score of four in their response, with many claiming to have felt “ecstatic” by this show of appreciation.

As Kumar and Epley point out, people neglect to send such notes either because they assume the recipients already know how much they are appreciated or because they are afraid of ineptly expressing their gratitude. Regarding this fear, the two social scientists indicated that sincerity of intent is much more important than the wording of the letter.

Although the hand-written letter is in danger of extinction, every once in a while we might take a few minutes and send someone we know a note of appreciation. It’s a small thing on our part, a pebble thrown into a pond, but the ripples may find their way to unforeseen shores. (It’s also an effective and inexpensive holiday gift.)

In her sonnet, “Love Is Not All,” Edna St. Vincent Millay wrote of love, but she might as well be writing of loneliness and a lack of appreciation:

Love can not fill the thickened lung with breath,
Nor clean the blood, nor set the fractured bone;
Yet many a man is making friends with death.
Even as I speak, for lack of love alone.

This post The Easiest Holiday Gift that Everyone Really Wants was originally published on Intellectual Takeout by Jeff Minick. He is a freelance writer and teacher living in Front Royal, Virginia. He may be found online at JeffMinick.com